Did hamburgers come from Hamburg?

Summer has just started, but most of us have already been to a number of the standard hot dog/hamburger cookouts, ice cream socials and picnics with assorted ants, bees, biting flies, etc.  So while we’re in the season, I thought I’d take a look at the origin of some of these summer holiday classics, starting with the hamburger. 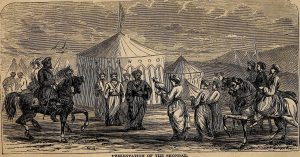 “Didst thou want fries with that, your highness?”

The name comes from the Hamburg, Germany, of course, but the concept of eating ground meat patties predates the city of Hamburg and even the country of Germany.  “What’s Cooking America” reports that ancient Egyptians ate ground meat and the fast-moving armies of Genghis Khan prepared their patties by placing minced meat under their saddles so that the meat could be tenderized by hours of rough riding and eaten with one hand without having to dismount. These were eaten rare, as in entirely uncooked rare, and I think we can assume there was no ketchup or sesame seed bun.  The Mogul armies eventually brought the concept to Russia where they added chopped onions and took away the saddle and called it “Steak Tartare.”

But here in the good ole’ U.S., we cook our burgers (no one goes to “raw outs” after all) so this favorite did not travel directly here from Russia. German sailors brought Steak Tartare to their own ports in the 1600s and not too long after that, English cookbooks begin referring to dishes being stuffed with minced beef in the “Hamburg style.”   My 1805 cookbook by Hannah Glasse (who was the Betty Crocker of the English speaking world back in the day) contains recipes for Hamburgh Sausages and “A Turkey Stuffed after the Hamburgh Way.” In both recipes, the meat is cooked, so the Hamburg style did not seem to refer to raw meat but to meat minced very fine with suet and spices. (And my husband thinks he’s being so creative when he adds seasoning to his burgers before cooking them. He doesn’t realize that the English, terrible cooks though they are, have been doing this for centuries).

In any case, at this time, all this meat was minced rather than ground in the style we are familiar with today because the machinery for grinding up meat hadn’t been invented yet. In the 1820-1840s era, patents were issued for machines that could quickly grind meat for sausage, and of course, that would work for hamburger meat, too. There’s still a lot of debate about when the term “hamburger” was first used or even served — in 1758, Hannah Glasse recommended serving the Hamburgh sausages with bread. Does that make it a hamburger? Does it need to be between slices of bread? Or does it need to be on a bun?

Personally, I think the first true hamburger would need to be the first one served on a bun, because that’s what gives it the distinctive look. But whether it was first eaten by a scullery maid putting a piece of leftover hamburgh steak into a crusty days-old Sally Lunn roll so she could eat it without dirtying more dishes or whether it was created by fair vendors looking for a way to way to sell portable meat or some other way, there is no denying the hamburger’s  recognition and popularity today as an “All-American” food. And since American culture is made up of combination of so many other cultures, that seems pretty fitting.

I didn’t even get to ketchup and mustard today, so I will explore those in a future post!

If you enjoy reading about cooking and kitchen operation during the 18th Century, you might be interested in my story Restitution, covers the journey of a family from a farm in a Moravian community in Western Maryland to the a great house in the genteel society of Annapolis.

Credit for starting me on  this topic goes to Vic on Jane Austen’s World who posted an article last summer on” Hannah Glasse’s Connection to the Hamburger” (http://janeaustensworld.wordpress.com/2011/06/12/hannah-glasses-connection-to-the-hamburger/)