During November and December, to celebrate the release of Roped In,  I will be on a “Virtual Book Tour” and posting a series of blogs about jump rope.  Tour stops are listed on my webpage here.  Roped In is a Karen Maxwell mystery (which means a detective novel  with humor rather than horror) that delves into the world of competitive jump rope.

Never heard of it? I hadn’t either until about ten years ago when my daughter Meg saw a jump rope team perform during halftime at a college basketball game. She was so excited by their skills and tricks that as soon as she got home, she immediately pulled out a jump rope and tried to jump while bouncing on a ball in the living room. I insisted that she learn how to jump rope without the ball first (and outside rather than in a room full of her grandmother’s antique furniture). 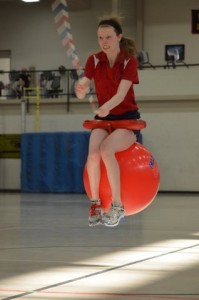 That was the start of our journey into the sport. Meg started jumping rope on the playground after school and taught herself enough so that she could try out for Kangaroo Kids, the team she’d seen. Of course she wasn’t doing anything like the complicated routines and skills she saw at the show. But some of those perfomers were her teachers, and she learned enough to start performing herself. A few years later, she was jumping in those halftime shows, too, bouncing on a hoppity hop just like she’d always wanted to do.

But there was more and we didn’t know how much more until she signed up to join the competition team.  Competitive jump rope is both an art and an athletic event. Some events are similar to gymnastics where jumpers combine skills into routines that are judged on the difficulty of the skills and the precision and grace with which the skills are executed. These “freestyle” events can include anywhere from one jumper to fifteen or more, and may include individual ropes, Double Dutch jumping and the use of ropes up to 30 feet long.

Other events are more like something you’d find at a track and field competition—they have quantifiable results. There are speed jumping events, including relays,  where jumpers race to see how many jumps they can complete in a specified amount of time. And there are power events where jumpers see how many double or triple under jumps they can complete without stopping.

Though Meg had been jumping for over four years by the time she started competing, she still had a long learning curve to develop the skills needed to be competitive in any of the events. Because jump rope is not as widespread as other sports, the competitive events are limited. Meg’s team generally competes in one practice tournament in February and two spring tournaments that serve as qualfiying events for national competitions. There are international competitions as well. But because the sport of jump rope is not unified under one sanctioning body and set of rules, it will probably be some years before it meets the requirements to be made part of the Olympic Games.

In future posts, I’ll talk a little about the history of jump rope and show some of the amazing results.  By the end of the series, I hope you’ll find this artistic sport as fascinating as I do.  So stay tuned!