I once saw a guy in my office printing out drawings of jack o’lanterns with a line through them. At first, I wondered what he had against pumpkins. How can any parent not like a smiling vegetable? Then I read the message under the picture “Sorry, no trick or treat. This house is washed in the blood of the lamb.” 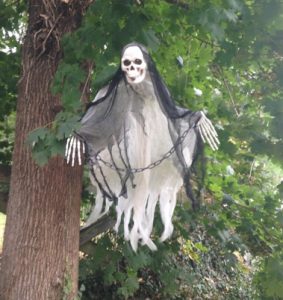 While it might sound like they were unable to give out treats because they’d been visited by the gory villain from a horror movie, instead they were trying to say that they wouldn’t give out candy because celebrating Halloween violated their Christian beliefs. While I recognize that they’re entitled to that opinion, here’s why I think they’re wrong. I do not believe that Halloween is an anti-Christian holiday. In fact, the meaning of Halloween can actually reinforce Christian truths.

First there’s the name. “Halloween” is a shortened form of All Hallows Evening. It is a the eve or night before All Hallows Day. This is a Christian holiday more often referred to now as All Saints Day and it is a time for remembering the most hallowed Christians. Many people think the word “hallow” has to do with the occult because of Halloween imagery or Harry Potter’s “deathly” hallows. But really nothing is further from the truth. Remember in the Lord’s prayer, we say “Hallowed be thy name.” It is a term of reverence and respect. So the eve of a feast honoring the saints is not a pagan celebration.

But, many are quick to point out, the Christian name All Hallows Eve was just pasted on top of a pagan celebration. And that is probably true. Celtic pagans celebrated the feast of Samhain near the cross quarter day which is halfway between autumn equinox and winter solstice. It marks the end of the bountiful harvest season and the coming of the dark winter months. Thought to be a time when the boundary between this world and the next was quite thin, the days were marked with feasts and offerings to spirits to ensure survival through the long winter. 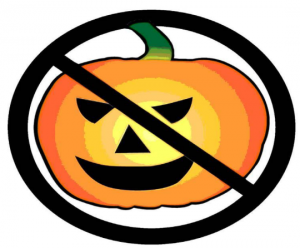 When missionaries tried to convert pagans to the Christian faith, they often found it difficult to encourage their converts to give up pagan celebrations. After all, most of us love a good party. So instead of cancelling the celebrations, they changed the reason for the celebration. And All Hallows Eve joins a long list of Christian holidays in bearing that distinction, including Christmas (winter solstice) and Easter (spring equinox).

The ancient Celtic druids may have believed that they were setting out offerings to ward off evil spirits. They may have carved jack o’lanterns out of turnips and dressed as spirits to confuse unwanted visitors from the otherworld. They were not trying to invite evil or encourage it, but rather survive the coming wrath of nature. In any case, these days people who dress in costume, carve pumpkins and put up scary decorations are certainly not trying to invite the damned into their homes. Most of us are just trying to add a little novelty into our lives and shake up the status quo a bit.

We live in a society that ignores death for the most part. We react with horror and sadness and then quickly turn away. Other societies were not fortunate enough to have that luxury.  Whether due to war, famine or disease, death was an everyday possibility. When we in our modern whitewashed culture put up skeletons and ghosts, we acknowledge that death exists and sooner or later it’s coming for all of us. It is the great equalizer. And it’s not pretty. The gore of Halloween reminds us that we can only ignore our mortality for so long. I think that’s a good thing.

And of course Christians can celebrate Halloween for other reasons. We have been freed from fears about death and fears of the dangers of evil spirits. We can celebrate that freedom and even make fun of our pagan past. Don’t get me wrong – I’m not saying evil doesn’t roam in this world. I’m just saying that we now know that carving a pumpkin or dressing as a spook isn’t going to drive it away. 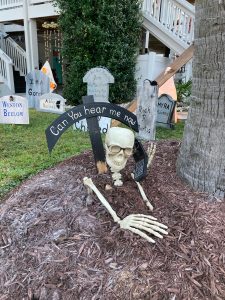 So if you believe in the promises of Christ, I think you can celebrate Halloween with a clear conscience. Likewise, if you choose to stay inside and keep the candy for yourself, you’re free to do that, too. But don’t be afraid that a pagan lurks behind every Halloween mask, because that is simply not true.

Years ago, Christmas used to be the time when friends and family would gather together and tell ghost stories. Inspired by this, I wrote a story about a scary Christmas tale that starts to come to life in my Christmas novella Bride of Belznickel.