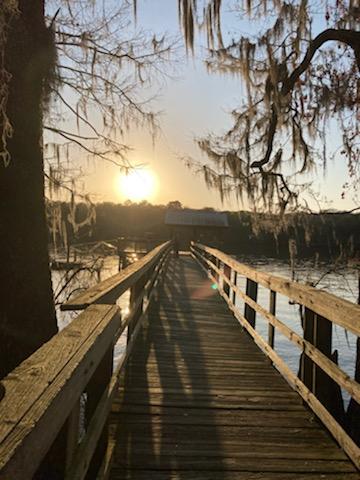 In 1774, Philadelphia botanist William Bartram was in the midst of a five year exploration of the southern British colonies of North America, spending most of his time in Florida and Georgia. His descriptions and drawings, later published in a travel journal, inspired poets and scientists alike. 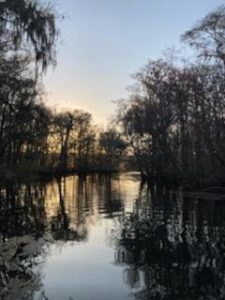 Many of the locations he described in his journal are now public parks with camping facilities, and one of those he visited in 1774 is Manatee Springs State Park. Over a hundred million gallons of water percolate through underground caves to feed the springs with remarkably clear water that stays at a constant 72 degree temperature all year long. In winter, manatees come up from the Gulf of Mexico, through the Suwanee River and into the springs to enjoy the comfortable water.

So, in the winter–like William Bartram and colonial sightseers before him–modern campers come to see the manatees.

When Bartram arrived, he only saw a manatee skeleton, but that’s because he came during the wrong season. We arrived in late afternoon at the end of February with high hopes of seeing a live manatee.
The campground seemed very nice, but sundown wasn’t far off, and the lovely full color map given to us at the ranger station showed that we had a long way to go to reach the springs. We had to hurry to if I was going to get to see a manatee.

Being sensible adults, my husband and I parked the van, conducted a test of the bathroom facilities, and then fought over which path to take to avoid getting stuck too far away in the dark. I was certain we needed to head in one direction, but he was convinced we should go the opposite way.

We were both spectaculrly wrong. Turns out that the map wasn’t exactly to scale. The four mile walk we anticipated turned out to be about 300 yards straight across a parking lot. So I had plenty of time to see the beautiful clear springs before nightfall.

Once I got past the vultures. 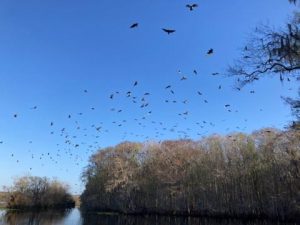 It seems that Manatee Springs is not only the winter retreat for a few manatees, but also the winter home of approximately 15 million black vultures. They cover the trees around the springs like lawyers at an accident scene–not welcome but expected. They line up on the handrails of the wooden walkways, hopping away with wings flapping as people approach, not wanting to commit the effort to actually fly unless they have to.

The springs may be gurgling with those millions of gallons of water, but no one hear them over the constant sound of flapping wings.

When I finally got close to the springs, I could see nothing except a lot of waving green moss that looked like a lazy sea monster. But, the rangers told me that the manatees could usually be spotted in the mornings near the boat ramp at about 8:00 a.m. before they moved out to the river to catch breakfast.

I set my alarm that night and expected the manatees to do likewise.

The next morning, I was there, phone in hand ready to take pictures. That is, after I shuffled through flocks of vultures hopping and flapping  away in the early light, of course.

Why was I so obsessed with seeing a manatee? We’d seen several years before in Tampa. I think it was just the power of suggestion. If the park had been named Vulture Springs I’d have been in ecstasy. 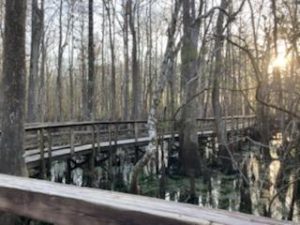 Unfortunately the springs were empty again, except for a few scuba divers coming to practice. But I followed the walkway out to the river, and there I saw something dark crest out of the water. I’m sure it was a manatee. Couldn’t possibly have been a fish or a frog. Yep, I told myself I’d definitely seen one of the manatees that inspired Bartram to name the spring. I got my dose of history and nature and it was time to get more coffee.

The park was lovely and we will definitely return. But I will enter it on my calendar as Camping with Vultures.
———————————
Dover Publications published an unabridged inexpensive edition of Bartram’s journals, but his work is now available for free online at sites like Documenting the American South. For information about camping at or visiting Manatee Springs State Park, check out some of the reviews.

If you enjoy reading about 18th Century travel, you might like my story Restitution in which a traveling peddler is enticed to become a courier for revolutionary causes.