Today is, at least according to one post on social media, National Bootlegger’s Day. This makes sense because January 17 was the day Prohibition took effect, and this year marks the 100th anniversary of that day.

While smuggling of alcohol to avoid taxes had long been a common practice, the profits to be gained from the illegal manufacture and import of booze reached tremendous new heights with the start of Prohibition. Instead of creating a sober society, Prohibition created an underground culture with unprecedented socialization between the sexes and unhealthy opportunities for organized crime. 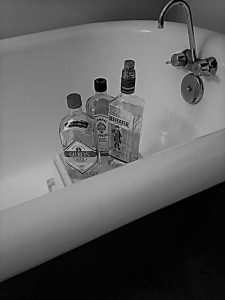 I had assumed that bootlegging was a pretty old term, but it only dates back to the 1880s or 1890s. Supposedly, it originated with traders concealing liquor in their boots when then they went to sell goods to Native Americans. I also assumed bootlegging referred to smuggling liquor, but it can also refer to making or selling illegal goods of all types.

I had heard that bootleggers smuggled in liquor and people tried to stretch it by adding substances such as embalming fluid. However, according to Mob Museum in Las Vegas, the bootlegging business included cottage industry in the tenements of Chicago and other cities.
Gangs would pay families to produce liquor in one-gallon copper stills in their kitchens, with the mobsters furnishing the raw ingredients. Families received good pay for their work, but the gangs made out like, well, bandits. The Genna brothers gang in Chicago paid less than 75 cents per gallon and sold their hooch to speakeasies for $6.00 a gallon.

Some entrepreneurial families produced their own homemade liquor, working with everything from beets to potato peel. Often, they flavored the strong liquid with juniper oil to make a crude type of gin. According to the Mob Museum, these producers needed to water down their strong drink and couldn’t fit the bottles under the faucet in the kitchen, so they used the bathtub faucet. Can you say bathtub gin?

In addition to the home producers distilling booze for sale, home brewing and winemaking thrived during Prohibition. However, loopholes in the federal laws allowed these practices, so families could produce about 1,000 bottles of wine per year without being considered bootleggers. A ton of grapes sold for $9.50 in 1919, but five years later, the price had exploded to $375 a ton. Speakeasies also popularized wine, and Italian food to go along with it, served at tables instead of the traditional bar.

Big time bootleggers were also known to steal industrial alcohol and redistill it for sale to speakeasies. Unfortunately, their efforts did not remove all of the toxic additives, and tens of thousands of people died from drinking alcohol that was intended for use in cleaning products, gasoline, paint, and other industrial purposes.

For more information about bootleggers, speakeasies, and illegal alcohol, check out http://prohibition.themobmuseum.org/the-history/the-prohibition-underworld/bootleggers-and-bathtub-gin/