Beware the Ides of March?

Today, March 15 is referred to as the Ides of March. Should we “beware” of the day? Is it like some super-annual Friday the 13th, full of bad luck? Should we run away from black cats and avoid walking under ladders? After all, Julius Caesar did not heed the warning “Beware the Ides of March,” and he ended up dead just a few Shakespearean lines later. What’s wrong with the Ides of March? Is mankind due to be punished for eating too much pie on 3.14? 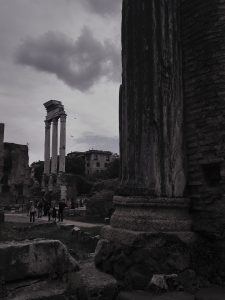 Fortunately, the only one who needed to worry about the Ides of March was Julius Caesar. Legend, made famous by Shakespeare’s play, tells that a soothsayer warned Caesar that he would suffer great harm sometime before the Ides of March. The Roman biographer Plutarch says that Caesar gloated when he saw the soothsayer on the predicted day, announcing that “The Ides of March are come”, and he was still unharmed, which implied that the prophecy was dead wrong. But while the seer agreed that the date had arrived, he noted that it had “not gone,” which meant there was still time for the prophecy to come true. And indeed before the end of the day, Julius Caesar had been stabbed 23 times by a group of conspirators, making the prophecy dead right.

But before this story, the Ides of March had not been associated with murder, bad luck or even minor tooth pain. The “Ides” was the just Roman way of describing the middle of the month. The ancient Romans used a lunar calendar with twelve months that seem a lot like ours—the months had names similar to the ones we use and each month was 29-31 days in length. But the Romans referred to dates on their calendar much differently. They named three of the days in each month and then referred to other days in anticipation of those named days. The “Kalends” was the first day of the month. The “Nones” was roughly at the end of the first of our modern weeks—it fell on the seventh day in March, May, July, and October and on the fifth in the other months. Finally, the “Ides” fell in the middle of the month, calculated as the fifteenth day in March, May, July, and October and the thirteenth day in the remaining months. So what we today call “March 9” would be “the sixth day before the Ides of March” to them. After the Ides (mid-month) it got even more confusing. March 17 would be “the 16th day before the Kalends of April.”

So the bottom line is that unless you happen to be Julius Caesar on your way to meet your friend Brutus at the theatre, you don’t need to worry about the Ides of March. Nevertheless you might want to avoid walking under ladders anyway, at least if they’re as rickety as the ladders at our house.

If you like stories about characters concerned with a predilection for bad luck, you might enjoy my pirate tale, Avery’s Treasure.