Arsenic in Old Lace: The Deadly Fashion Trend That Attacked People Where They Lived

Over the years, I have written a few blog posts focused on some of the worst fashion ideas in history. And I had a lot to say, because the ideas were really that bad.

But I missed one. And it was a doozy.

I completed missed a fashion trend that maimed and killed considerable numbers of people over the course of about 100 years. The trend didn’t involve silly-looking garments, and that could be why I missed it. But it’s time to remedy that oversight now. Get ready to meet the deadly green dye. 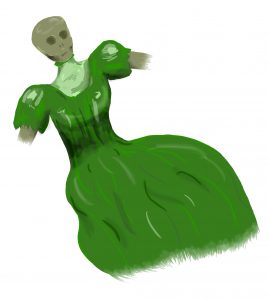 Scheele’s Green Becomes All the Rage

Bright, vivid colors in fabric and paint have frequently been popular throughout the ages, Bright pigments often cost considerable amounts to produce, and so wearing them or showing them off in your home is one way to demonstrate your importance.

In 1775, Swedish chemist Carl Scheele invented a green pigment derived from acidic copper arsenite. Soon known as Scheele’s Green, the color became tremendously popular in fashion and home décor, primarily wallpaper. Textile manufacturers loved it because this dye, and the similar Paris Green, produced vibrant green with greater ease than other methods, and the color did not fade like earlier dyes. It would remain popular for nearly a century.

And that was a problem. The pigment was highly toxic and could be absorbed through the skin.

Trends usually carry over into multiple areas, and so it was with Scheele’s green. It was used in a wide variety of products that could kill people including:

The pigment was even used as a coloring in candy.

People knew arsenic was poisonous if eaten, so it wasn’t used much intentionally in candy (One confectioner did accidentally mix up containers of sugar and white powered arsenic with the result that he added 12 pounds of arsenic to his recipe and killed 20 people, including himself.)

Aresenic was sometimes even referred to as “inheritance powder.”

People erroneously assumed, however, that just having the color around on the walls wouldn’t be a problem. They believed the substance could be beneficial in small doses to cure diseases such as cancer and syphilis, and they would even dip meat in an arsenic mixture to repel flies from the table.

Scheele’s Green was particularly popular as a pigment in wall coverings because it also served as effective pesticide. It killed ants, termites, and other insects. The problem was that it was used commonly in flocked wallpaper, and over time, the flocking would fleck off the walls into the air, and could produce arsenical gas in London’s damp air. 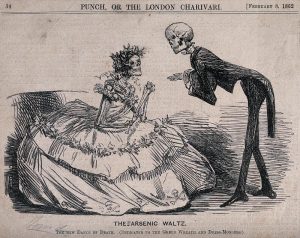 Voluminous Victorian gowns might contains seven or more yards of arsenic-laced fabric, but these were the not garments that posed the greatest danger to wearers. A women wearing a gown like the ones in the picture would be wearing a chemise, corset, multiple petticoats, and probably drawers, all of which would insulate her from contact with the green fabric.

Her stockings, on the other hand, could pose a big problem. They were worn tight against the skin, and they often came up over the knees so they could be held up with garters, so they were in contact with a lot of skin. They also contained a higher percentage of arsenic than the fabric used to make gowns.

In addition, a woman earing a green gown and green stockings might also be adorned with decorative flowers with an extremely high percentage of toxic dye.

Suffering to Make Someone Else Beautiful

As is so often the case, the women and men poisoned by dangerous fashion are not always the ones willing to suffer to be beautiful. Just as hatters used to go mad from mercury used in felting hats, the seamstresses, dyers, laundresses, painters, and paper hangers who dealt with arsenic-laden green objects every day were often the ones who suffered the most.

Publicity around the dangers of arsenic in wallpaper and fabric caused consumer concern starting in the 1850s, but regulations to protect workers in factories that produced products with arsenic didn’t show up until decades later. Eventually, by the early 20th century, consumer demand for “arsenic free” wallpaper and other products finally put an end to industrial poisoning by arsenic.

Even though the green dyes of Scheele’s Green and Paris Green got the most negative attention, modern analysists have determined that other color dyes were just as (if not more) dangerous. The highest levels of arsenic have actually been found in red and black garments from the Victorian era.

And powdered white lead was popular as a face makeup for centuries despite the corruption caused to the skin (and the brain) by lead poisoning. They took the lead out of makeup eventually, but left it in paint because they figured no one would eat it.

They were wrong, as our society later learned. Decorative trends can have dangerous consequences that might appear to defy common sense.

And that makes me wonder what fashion trends from our era will be looked back on in horror by future generations.

There are many articles online about the deadly dye fashions of the Victorians. Some of my favorites include:
The Dyes of Death in MdHistory.org, The Arsenic Dress in Jezebel.com, Death by Wallpaper in  Hyperallergic.com, and Killer Clothing in National Geographic. Yes, someone clearly had fun writing the titles….

I have not written a book with details about dangerous dyes, but I have written about the hazards of making soap in the colonial era in Langley’s Choice and the exhaustion of colonial laundry demonstrations as a reenactor in George Washington Stepped Here.