At first, I thought I heard wrong. I could have sworn the state park employee behind the counter told a co-worker that she needed an “Ammonia Coke.” Being nosy, I had to ask.

And I heard right. She wanted to head down to the local lunch counter for a “hand-pumped” Coca-Cola with ammonia spirits stirred in. She said it was good for a little extra energy when she needed a pick me up. 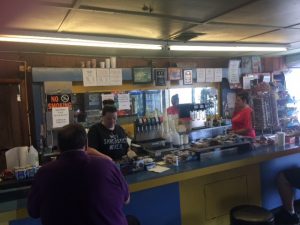 My husband and I learned about this mysterious concoction on Friday afternoon and we told others in our group as we met up with them over the course of the weekend. I had no cell service but one of my friend’s was kind enough to look up the drink to see if it was for real.

According to a couple of different sources, ammoniated Coca-Cola is made with approximately ½ teaspoon of aromatic spirits of ammonia added to eight ounces of Coke. Spirits of ammonia consist of about two percent ammonia diluted with water, ethyl alcohol, and essential oils that could include lavender, nutmeg, or lemon. So drinking an ammonia Coke is not exactly like chugging a bottle of ammonia cleaner. Still, it did not sound appealing to anyone. While I was determined to try it, I was not averse to the putting off the experience for as long as possible while the other 11 people in our group made jokes about my gullibility. 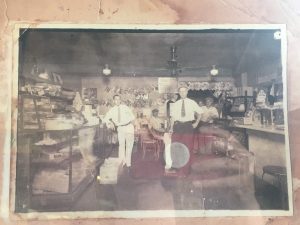 Ammonia Coke was once touted as a cure for everything from hysteria to hangovers. The spirits do neutralize some of the acid in the Coke, so some people found it to be a cure for indigestion. Spirits of ammonia are still sold in pharmacies in the first aid section as smelling salts. Yum!

By Monday afternoon, I had run out of excuses to put it off. It was time to put my mouth where my money was and try the ammonia Coke for myself. By this point, our group was down to six, but to my surprise, they were all ready to head to Gordon’s in Crisfield.

Gordon’s has been selling food to local watermen since the early 1920s and the place doesn’t look like it has been redecorated much over the years. The paint is pretty barked up on the wooden tables and chairs. Under the lunch counter, the surface of the shoe ledge is worn away from nearly 100 years of foot traffic.

After we all spent a few minutes reading the old signs, I stepped up to the counter, ordered my drink, and watched to see if the waitress would blink. Instead, she just asked “what size?” She held up cups to show me the various sizes, but I was already insisting on a “small” and wondering if they had super-mini size.

I watched her pump Coke syrup into the cup, fill it with soda water, and give it a stir. Then she picked up a small glass bottle and shook several drops into the cup. “Is that the ammonia?” I asked. She nodded, then put the lid on the cup and handed me a straw.

Taking a deep breath, I shoved the straw in the cup and got ready to potentially poison myself. Then I stopped. My husband and friends surprised me by ordering their own ammonia Cokes. So, we would either all enjoy a great burst of healing energy or all gag and collapse together. 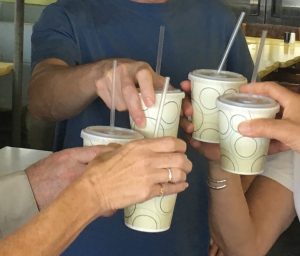 I waited until everyone had their drinks, we had a toast and then I took a sip. My ammonia Coke tasted exactly like a regular Coke. Maybe a little sweeter because of the extra syrup. I paused to see if I felt any different.

However, my friends had different experiences and I soon learned why. First, when you take the lid off the cup, the power of the aroma is hard to deny. It smells like a million things, none of them cola-related.

I also learned that some of the drinks served to our group had a lot more ammonia drops than mine did (because  of course I had to try all of them). While the taste was strong, it didn’t remind me of ammonia at all. It started off like pine and then turned to wintergreen. In other words, Pine Sol and Pepto-Bismol. But it wasn’t bad, just weird. I had to drink all of mine and half of one of the strong ones just to see what effect it would have.

That was five hours ago and I’m still waiting, so maybe there isn’t going to be one. The girl behind the counter said ammonia Cokes are popular as a hangover cure. I didn’t have a hangover, but maybe I could try to see if the drink works as a hangover preventative. Stay tuned…. 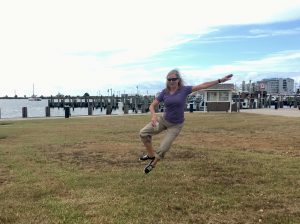 Thanks to Jackie Ryan for photos and research!

Nobody drinks ammonia Coke in any of my stories (but I’m sure they will in the future)
My soccer mom detective Karen Maxwell, however, is addicted to Diet Coke. You can read the sad story of her caffeine addiction in George Washington Stepped Here.