A One-Horse Open Obscenity: The Revolting Origin of Jingle Bells 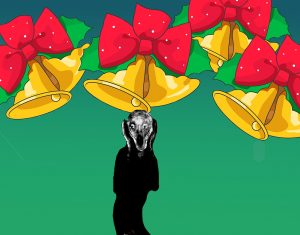 Jingle Bells is not only one of the most popular Christmas songs, but one of the best-known melodies in American culture. Astronauts even smuggled instruments onto Gemini 6 so they could broadcast the song from space.

But Jingle Bells does not have the wholesome origin that most people envision. Originally titled “One Horse Open Sleigh,” the song first appears on a playbill for a show produced in Boston in 1857. This fits the image we have of families enjoying the fresh air and snow at Christmas time—although the production took place on September 15, which is a little before the season even by modern marketing standards.

The problem, however, is not the timing but the show itself. The September 15 production featured song and dance numbers performed by “Ordway’s Æolians” including “New Ethiopian Melodies.” That phrase should make you a little nervous right there, since this was a troupe of white performers. For the first part of the evening, the Æolians performed in blackface as the “Dandy Darkies” And the song “One Horse Open Sleigh was performed in the first act. That means the Jingle Bells was first sung onstage by a white guy with black makeup on his face, ridiculing African-American culture.

[Insert expression of disgust here. I couldn’t find one good enough so you’ll probably do better on your own.]

The song’s ugly origins were unearthed by theater historian Kyna Hamill and described in detail in a 2016 article in Boston University’s BU Today. Why didn’t this get more publicity? Hamill started researching the song because as a volunteer for the Medford Historical Society, she was always getting questions from reporters who had heard the song was written in a Medford tavern in 1850 while the composer watched sleighs race down the street.

It turns out that in 1850, the composer, James Pierpont, was in California trying to make money off the miners who flocked out west during the Gold Rush. When his shop burned down, he returned to Boston broke and eventually ended up writing songs for Ordway Hall and other venues. Ordway Hall stood opposite the Old South Meeting House in Boston, and was a popular venue for racist blackface performances. Pierpont wrote approximately a dozen songs for the Æolians before moving to Savannah at about the same time he copyrighted “One Horse Open Sleigh.” Two years later, he re-copyrighted it as “Jingle Bells or the One Horse Open Sleigh.” The song was similar to other minstrel songs of the period, some of which also referred to sleigh rides, which often had an unsavory reputation involving alcohol and unchaperoned contact between the sexes. Pierpont himself was a perpetually broke, heavy drinking problem child who joined the Confederate Army to spite his abolitionist father.

So, to sum it up, Jingle Bells is a song with racist origins celebrating drunken debauchery and not mentioning a single thing about the birth of Jesus or even a pagan evergreen tree. Not exactly the perfect Christmas song, even for this loathsome year.

Time to find a new tune.

If you’d like to read more about the history of Jingle Bells and see the playbill listing the original song in the minstrel show, check out http://www.bu.edu/articles/2016/jingle-bells-history/
My story Bride of Belznickel focuses on some American Christmas traditions but none involving sleigh rides or blackface. Instead, the tale focuses on stories of the Christmas demon Belznickel.