The word “festive” equals “party” in my world, and parties provide the perfect excuse to try new drinks with no persuasion needed. So for my blog about the release of the next book in the Cotillion Christmas Traditions Regency romance series—this one titled Festive Persuasion—I decided to look at some drinks from the 18th and 19th Century period that are pretty uncommon these days. And I’m not talking small beer, either. These are pretty high on the alcoholic content scale. 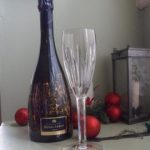 When Monty Python’s knights were sent to fetch “a shrubbery,” they might have done better to bring back a shrub instead. Shrub is made with citrus fruit and spirits, often a mixture of brandy and white wine. Martha Washington’s family recipe calls for equal parts brandy, white wine and water, with sliced lemons and sugar. The mixture is to sit for three days and then the lemons are crushed into it and then the seeds, peel and pulp are strained out.  In some versions, vinegar is used in place of the citrus, and herbs of all types can be added. It sounds odd, but the versions I’ve tasted have been pretty good.

If you think shrub sounds a bit odd, it’s nothing compared to our next drink, a syllabub. This was probably out of fashion by the Regency period, but certainly some members of the older generation would have fond memories of it. It’s a sort of whipped cream and wine mixture, sometimes also made with eggs. One recipe (which is actually in the confectionary section of recipes for housekeepers) calls for a lump of sugar rolled in lemon peel and dumped in a pint a milk. More sugar is added, then lemon juice and then brandy or Madeira (a fortified red wine). This mixture is whipped until frothy, and then spooned on top of a glass of red wine. Other recipes adds  flavored liqueur or spices to the cream. It sounds a bit like eggnog, but mixed with red wine. (For more on eggnog, check here.) There are even stories of bowls of syllabub taken out to the barn to get a squirt of fresh milk just before serving.

All types of wines were popular, too, including champagne (see here for more on my favorite drink), and for the lesser sort, homemade wines composed of everything from gillyflowers to turnips (see my post here for more on wines and wine doctoring). And of course there were even more types of punches than wines. The difference is that the punches might well be mixed by the host himself in front of his guests, whereas the lowly housekeeper would be working in obscurity to make her rhubarb wine. (More about punch will be forthcoming in a future post.)

Now that I’ve give you some ideas, choose your poison, find a good book, and settle in for an adventure.

Today we’re celebrating the release of Festive Persuasion by Charlene Roberts, which is the third story in the Christmas Traditions collection. In this tale, the hero’s connection to a murder forces him to give up any hope of a match with the heroine. She, meanwhile, has to use all means at her disposal to persuade him that her feelings for him have not changed. (Okay, this is a traditional Regency romance, so she doesn’t use all the means at her disposal, just the ones that don’t require her to remove clothing)

Click on the cover to learn more about the story, or visit the author’s website at http://charlenelroberts.wordpress.com.

And get those drinks ready. It’s a party party weekend!