Catonsville Elementary: the history of an abandoned school

For only the second time in the last 107 years, no students entered the building at 615 Frederick Road at the start of the school year. Instead, the students of Catonsville Elementary School walked into a newly refurbished building around the corner on Bloomsbury Avenue. But the memories of years of learning fill the halls of the red brick building on Catonsville’s main street. 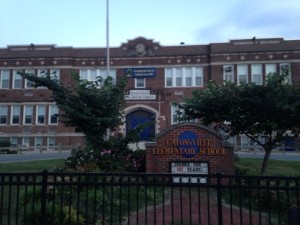 In 1907, the Catonsville School Committee went to the Baltimore County School Board to ask for a new school building. In support of their cause, the Committee pledged to raise $10,000, estimated to be a quarter of the building cost. They also agreed to find a location for the new school. This all proved to be easier said than done.

A team of concerned citizens went door to door collecting money for the project, but this effort fared so badly that a May 1908 article in the local newspaper reported that the new school project had been abandoned. Money was not the only problem. It turns out that the proposed location on Frederick Road was also a concern to parents who didn’t want their children educated in close proximity to an electric streetcar line and three bars.

But opposition to the plan gradually gave way and fundraisers finally succeeded enough to move forward. The Committee purchased a three acre lot and blacksmith shop from Remus Adams, who had served as a blacksmith in the community since before the Civil War. Construction of the new building began in the spring of 1909. Even though the school would serve students of all grades, the School Committee wanted it to be called “Catonsville High School” to emphasize the fact that they offered classes up through tenth grade.

When it opened in 1910, the school contained fourteen classrooms, an assembly room, teacher rooms, a science lab, a typewriter room, a domestic science room, a manual training room, a play room and “toilet rooms.” In its first decade of operation, students who didn’t walk to school usually rode their bicycles or rode the streetcar. Some came by horse and wagon and parked at Davis’s Hay and Feed business next door to the school.

The Woman’s Civic League described the school as “the most imposing structure in the village” in 1912, but the description becomes less impressive when the condition of the Catonsville itself is taken into consideration. At the time, the League was calling for the community to abolish open sewers and pave Frederick Road.

Soon after opening, the school was drawing students from Relay, Halethorpe, Arbutus, St. Denis and even Randallstown. And within only a handful of years after it was built, the combined Catonsville High School/Grammar School was so crowded that two “portable” buildings had to be set up behind the main building to provide enough classroom space. By 1922, the high school yearbook reported that approximately 300 hundred students were attending classes in makeshift surroundings. Five classes met in portable buildings out in back, two met in an overcrowded annex, two met in offices, and the gym and study classes had to use the hallways. The school had no library and the administrators had to use the corner of a cloakroom as an office.

Fortunately, plans were already underway for a new high school to be built on Bloomsbury Avenue. So from 1925 on, the building at 615 Frederick Road schooled elementary students only. But sometimes, over the succeeding decades, that included students in grades six and seven who were as big as the teachers. In the 1930s and 40s, Catonsville Elementary was one of the largest in the county, hosting large Halloween parades and May Day festivities. In the 1950s, Catonsville Elementary welcomed its first African-American students, one of whom later stated in an interview that while she did get called names by a few students, her mom made a few phone calls and it “stopped right away.” for the most part she didn’t recollect any of the tension involved in being among the first African-American students to attend what had been an all-Caucasian school. “It didn’t bother me because I didn’t really know what was going on,” she says. But she did remember seeing herself on television after her first day at school.

In the 1960s, Catonsville Elementary added a kindergarten program that served students from other schools as well. Then in 1971, the school year started off with the halls just as empty of students as they are now. A major renovation and addition project had fallen behind schedule, so for the first few months of the school year, Catonsville Elementary students attended school at Hillcrest Elementary, with one school population attending in the morning and the other in the afternoon.

As the years progressed, the major modernizations of 1971 weren’t so modern anymore. And administrators finally decided that rather than update the building again, they would simply send the students someplace else. Teachers packed up and moved around the corner to that high school building built in 1925, which had since been turned into a middle school and then closed in 1987 when it was deemed to old to renovate. The school board wanted to demolish the building in 1995, but protests from residents resulted in the building being turned into a community center instead. And now it has become the “new” elementary school.

Just as they changed their opinions about the building on Bloomsbury, many people, myself included, hope that the powers that be will realize that we do have a place for the buildings that shaped our community for so many years. The building at 615 Frederick Road might no longer be labeled “Catonsville Elementary School,” but that doesn’t make it any less valuable to Catonsville. We need to keep it.