Mercy, what have you done to Petersburg?

When I glanced up at the TV screen, the first thing I noticed was the big poofy Scarlett O’Hara gown. So I was looking at some show set during the Civil War. But there was not a plantation in sight–in fact, it was a town of red brick buildings. And then I remembered a brief visit to downtown Peterburg, Virginia about nine years ago. 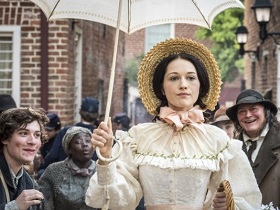 I had been completely mesmerized by the collection of buildings that looked as if they’d been left untouched since the 1860s. At the time, my kids were not so mesmerized, so we kept the visit short. But I vowed to return. And now I’m wondering if it’s too late. That woman in the Scarlett O’Hara gown was part of the PBS miniseries Mercy Street, most of which was filmed in Petersburg. The filming process can wreak havoc on a site. I dug out the article I wrote about my first impression of Petersburg, and I’m posting it below. In a few weeks, I will hopefully have the chance to visit again and I’ll report back on what I find.
Why Can’t We Just Stop at McDonald’s?

All the kids wanted was a restroom. But I was searching for more–I was on the lookout for a respite from the unmitigated dullness of I-95. This is not a new theme for me. Ever since my parents moved to South Carolina eleven years ago, we’ve been traveling that 600 mile stretch of highway, which is always either incredibly boring or incredibly stressful (and sometimes even the stress gets incredibly boring). Today, since the kids needed a break just south of Richmond, Virginia, I decided to unravel the mystery of Colonial Heights. Was it really colonial? And were there any heights?

I grew up in a town called Arlington Heights, Illinois and am embarrassed to admit that until I was in my mid-twenties, I thought that “Heights” was just a fancy term for a collection of housing developments. It wasn’t until I was reading a description of the battle at Harpers Ferry, when they described attacks from “Maryland Heights,” that it finally dawned on me that the army was not attacking from a suburban housing development. They were attacking from those big bluffs overlooking the town. (Actually, I think I first asked someone about housing developments during the Civil War before my fiance explained what the heights were.)

My confusion is understandable if you are familiar with the northwest suburbs of Chicago: there are lots of housing developments and no hills higher than a pitching mound.

So anyway, I wanted to ask someone if Colonial Heights lived up to its name. But there was no historical marker or visitor’s center for Colonial Heights. Just a mile south, however, was the exit for the Petersburg Visitors Center. So we pulled off and started following the signs.

Though we didn’t have to go far, it seemed a long way because we had to turn every two blocks. I felt like we were going in a giant circle, (my son thought it was more of a stair-step pattern.)

But we arrived, the center was open, and the restrooms were clean and inviting. Housed in an early 19th Century building near the old train depot, the Visitors Center looked promising. But to my disappointment, only the basement of the building was open. And while they had racks of brochures, there were no exhibits about the town. In fact, when I started asking questions, the friendly guide admitted that they didn’t even have any brochures about the tourist attractions in Petersburg. She did recommend visiting a number of sites, including the Siege Museum and the Blandford Church. And she told me that Colonial Heights did indeed live up to its name – during the Revolutionary War, Continental soldiers fired down from the heights during the battle of Petersburg. (I didn’t see any heights as we drove past the town, but maybe they’ve turned them into pitching mounds.)

So we struck out, in terms of finding a great informative visitor’s center like we found in Halifax last year. But before we left, we spent a few minutes walking through the streets (labeled “Old Towne Historic District”). Despite the bright mid-day sun, my daughter said she thought the area was “sort of creepy and all run-down.” My son asked if we could hurry up since his black shirt was absorbing all the sunlight and making him hot. They both asked why there were so many cars parked around and yet no people in sight. Then they asked why I was writing down everything they said.

I decided it was encouraging to see so much of the old town preserved – all the uneven brick streets, the early 19th Century buildings, and odd train relics including something that looked like an early locomotive. But it was sad to see the area so devoid of life. Further up the hill, the buildings housed antique shops and restaurants, and those seemed to be doing some business. All in all, it was an enjoyable place to walk around (unlike Emporia, where we tried a similar stop a year or two ago).

On our way back home, I hope to return to Petersburg to visit the Siege Museum and maybe the tavern on the next block up from the visitor’s center. We may even try to stop by the store with fresh painted bricks advertising “live and dressed poultry” for sale.

Think how much fun our dogs would have with those souvenirs!